15th June 2011
Dear Secretary-General,
We are three Bahraini women, who have come to the UN office today to call for immediate action on the issue of political prisoners in Bahrain. Like hundreds of families, we have been suffering because of the government crackdown through mass arrests of innocent people in an attempt to silence the demands for democracy and human rights. Each one of us has members of our family in detention.
Asma Darwish – Asma's brother, photographer Mohammed Darwish, is in detention. She was allowed to visit him 2 days ago for the first time since his arrest. Mohammed told Asma that he was tortured and that he had been hospitalized for the past week. Asma is on hungerstrike in protest of what has happened to her brother and countless other Bahrainis. Today marks the 12th day of her hunger strike.
Sawsan Jawad – Sawsans father has been named Bahrain's Nelson Mandela. He is 64 years old and is said to be the oldest political prisoner in Bahrain. Jawad is on military trial, and has spoken in court several times about the torture he is being subjected to. Jawads only crime is that he is an activist, who has been very vocal against arbitrary detention and torture, which he is now himself a victim of.
Zainab Alkhawaja – Zainabs father, husband, brother-in-law and uncle are in detention. Her father, human rights activist, Abdulhadi Alkhawaja, was tortured so severely it resulted in four facial fractures. Alkhawaja went through major surgery during his detention. Alkhawaja is also now on military trial. Zainab doesn't know where her husband is, and hasn't been given any visitation rights since his arrest 2 months ago.
Our cases are not unique, there are hundreds going through the same or even worse. The detention, torture and trials of innocent people has become common and systematic in Bahrain. Many are on unfair military trials with false charges, some as absurd as "spreading hatred against the regime." The UN must not allow this to continue.
We know that one of the UN's main purposes is "(…)To promote and protect all Human Rights". The hundreds of detainees in Bahraini prisons need protection now.  It is too late to protect and save the four people who have already died in police custody, but we are here to demand that something is done to save the rest.
We are here to urge the UN to take action to ensure that: All political prisoners get released immediately, the false charges are dropped, and that allegations of torture are investigated and those responsible held accountable.
Sincerely,
Asma Darwish                                 Sawsan Jawad                              Zainab Alkhawaja
مرسلة بواسطة angryarabiya في 8:33 م هناك 4 تعليقات:

This is Khadija AlMousawi, Zainab's mother and I am writing this message on her behalf, because she is too weak to write.
In the past few days Zainab's health has deteriorated and she has had trouble breathing with fast heart beat. In the last two days she was having trouble standing up or sitting straight and I had to give her water using a spoon.
In such circumstances she was visited by people from human rights organizations who promised to do all they can for her detained family and requested that Zainab ends her hunger strike especially since she could not speak on behalf of her loved ones in detention due to the hunger strike.
Moreover, Nabeel Rajab the Head of the Bahrain Center for Human Rights, who is also a close friend of the family, requested the same. Family members who visited Zainab were extremely worried about her health.
Based on these requests, Zainab decided to end her hunger strike on its tenth day, which is today, thanking all those who joined her and those who supported her all over the world. She would also like to thank all the journalists who wrote about her case and would like to tell everyone that we got news about her father Abdulhadi, her husband Wafi AlMajed, and her brother-in-law Hussein Ahmed as the Ministry of Interior contacted us and asked that we take clothes for them.
As soon as she feels better, Zainab will be writing to thank you all herself.

The following is arabic translation of the letter:

Thank you Yousif for the translation. 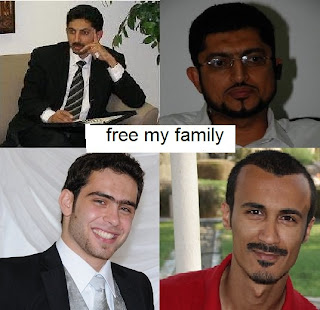 Mr. President,
I write to you from Bahrain, after living through horrible injustice that I would never wish upon anyone in the world. Security forces attacked my home, broke our doors with sledgehammers, and terrified my family. Without any warning, without an arrest warrant and without giving any reasons; armed, masked men attacked my father. Although they said nothing, we all know that my father's crime is being a human rights activist. My father was grabbed by the neck, dragged down a flight of stairs and then beaten unconscious in front of me. He never raised his hand to resist them, and the only words he said were "I can't breathe". Even after he was unconscious the masked men kept kicking and beating him while cursing and saying that they were going to kill him. This is a very real threat considering that in the past two weeks alone three political prisoners have died in custody. The special forces also beat up and arrested my husband and brother-in-law.
Since their arrest, 3 days ago, we have heard nothing. We do not know where they are and whether they are safe or not. In fact, we still have no news of my uncle who was arrested 3 weeks ago, when troops put guns to the heads of his children and beat his wife severely.
Having studied in America, I have seen how strongly your people believe in freedom and democracy. Even through these horrible times many of the people supporting me are Americans who never thought their government would stand by dictators and against freedom-loving people. To the American people I send my love and gratitude.
I chose to write to you and not to my own government because the Alkhalifa regime has already proven that they do not care about our rights or our lives.
When you were sworn in as president of the United States, I had high hopes. I thought: here is a person who would have never become a president if it were not for the African-American fight for civil liberties; he will understand our fight for freedom. Unfortunately, so far my hopes have been shattered. I might have misunderstood. What was it you meant Mr. president? YES WE CAN… support dictators? YES WE CAN… help oppress pro-democracy protesters? YES WE CAN… turn a blind eye to a people's suffering?
Our wonderful memories have all been replaced by horrible ones. Our staircase still has traces of my father's blood. I sit in my living room and can see where my father and husband were thrown face down and beaten. I see their shoes by the door and remember they were taken barefoot. As a daughter and as a wife I refuse to stay silent while my father and husband are probably being tortured in Bahraini prisons. As a mother of a one-year-old who wants her father and grandfather back, I must take a stand. I will not be helpless. Starting 6pm Bahrain time tonight I will go on a hunger strike. I demand the immediate release of my family members.  My father: Abdulhadi Alkhawaja. My husband: Wafi Almajed. My brother-in-law: Hussein Ahmed. My unlce: Salah Alkhawaja.
I am writing this letter to let you know, that if anything happens to my father, my husband, my uncle, my brother-in-law, or to me, I hold you just as responsible as the AlKhalifa regime. Your support for this monarchy makes your government a partner in crime. I still have hope that you will realize that freedom and human rights mean as much to a Bahraini person as it does to an American, Syrian or a Libyan and that regional and political considerations should not be prioritized over liberty and human rights.
I ask of you to look into your beautiful daughters' eyes tonight and think to yourself what you are personally willing to sacrifice in order to make sure they can sleep safe at night, that they can grow up with hope rather than fear and heartache, that they can have their father and grandfathers embrace to run to when they are hurt or in need of support. Last night my one-year-old daughter went knocking on our bedroom door calling for her father, the first word she ever learnt. It tore my heart to pieces. How do you explain to a one-year-old that her father is imprisoned? I need to look into my daughter's eyes tomorrow, next week, in the years to come, and tell her I did all that I could to protect her family and future.
For my daughter's sake, for her future, for my father's life, for the life of my husband, to unite my family again, I will begin my hunger strike.
Zainab Alkhawaja
11th April 2011
مرسلة بواسطة angryarabiya في 4:54 ص هناك 56 تعليقًا: